A few weeks ago we noticed on the weather report that the area where we live was under a tornado watch. But, since we were in at the time, we didn’t pay much attention except to make a mental note to check to see if the house was still there the next time we went to .

Well, it must have been quite a storm. The big white oak tree next to the path to the “Never-Ending Village” broke off about 5 feet off the ground. We knew the tree was h 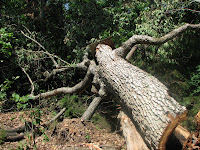 ollow – Dave and his friends cut off one large branch several years ago about 15 feet off the ground. N 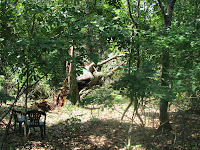 ot only was the branch hollow, but we could see all the way down to the ground, or as least as far as our flashlights would penetrate.

When the oak fell, it took with it the juniper tree that was right next to it. The juniper was probably 30 feet tall and a good foot in diameter. We used it as a ladder to climb up into the oak tree. Also as it fell, the oak uprooted and toppled a medium sized hickory tree. The juniper was broken off about two feet off the ground, but the hickory just toppled, leaving a big hole where the roots used to be. The hickory tree is quite tall and very straight. I think I could get a very good log out of it, and might try to do so. If it is solid wood all the way through, it will be worth it to try to save a piece of it. 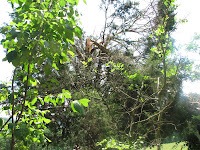 Farther down in the meadow, the juniper tree that is next to the wagon wheel path broke off about 15 feet up, so that the top third of the tree is now gone. It didn’t break off cleanly, but is held by a few splinters. I will have to find a way to get up there to cut it off cleanly.

In the north woods a very large black walnut tree broke off about 8 feet off the ground, and then broke again about 10 feet further up the trunk. 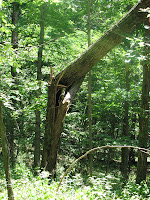 Then it caught in other trees around it. It must have been nearly 100 feet tall, and probably two feet in diameter. None of it fell cleanly onto the ground, but it is all tangled up in othe 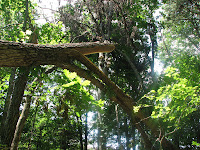 r trees – it will be a difficult and dangerous job to get it down. But, it looks like there are at least two places where a 8-foot log could be salvaged from the tree, and many other smaller pieces could be harvested. Black walnut being such a beautiful wood, I want to salvage as much of it as I can. I think Carol is going to try to call some lumber mills and see if we can get a custom sawing of any logs I manage to salvage.

Down in the ravine, the top of one tree broke off, probably 80 feet up, and is hanging ominously over the road down into the ravine. I have no idea how to get it down or cut off cleanly. And down by the target range area there is a quite large chunk of another tree laying in the path. 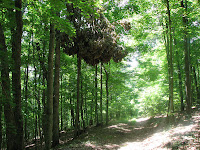 It is too large to move by hand, and it is blocking the ATV road there, making it hard to turn around. 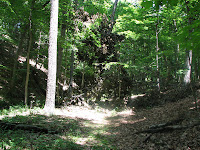 It will have to be sawn apart with the chain saw. The part that is laying on the ground is the top part of a tree that broke off cleanly about 80 feet up. The trees in the ravine have to grow straight up for about 100 feet in order to get light, so all the trees there are very tall and very straight.

Today I tackled the white oak. Last week I went around it with my trimming axe and cut away a lot of the smaller branches so I could see how the main trunk lay and what was holding it up. Even with that preliminary work, I made six piles of trimmings at various locations around the tree. Thinking about it during the week, I decided that I could cut away the main trunk beginning at the lower end where the diameter is probably three feet. But because it is hollow, there is only an annulus to cut through. So today I began. I cut off one very large branch of the oak, climbing up on the main trunk to get at it – I didn’t think the trunk would shift as I cut the branch away, and it didn’t, much. I also thought the trunk was resting on the juniper, but when I saw daylight all along the juniper trunk, I decided I could cut it through, so I did, getting a good 10 feet of juniper trunk out in one piece. Cutting the juniper filled the glade with the scent of cedar – what a wonderful smell!

Having cut the juniper away, I could now see that the oak trunk was resting on the hickory tree via a small remnant of one oak branch about 6 inches in diameter. I tried chipping away at that branch with my axe, but couldn’t get the trunk to move any. Then I went around and cut up the large branches that I had trimmed the week before. One of these was a branch that I thought might be holding the trunk up some, but I cut it away without the trunk moving any. Then I continued cutting off the main trunk from the bottom up to just below the short branch that rests on the hickory. Once I got to where the trunk was intact all the way around, I had to cut first from one side, and then go around and cut from the other side. At some point, the piece I was cutting off would split lengthwise, so the trunk would come off in arcs rather than as a complete cylinder. The actual living wood was only about 3 or 4 inches thick all the way around the trunk – the rest was hollow. 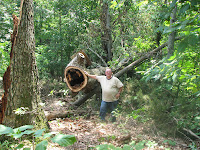 By this time I was drenched with sweat and could hardly hold my chain saw up any more. I knew I was reaching the end when I would pick up my saw, start it, make one cut, turn it off again and wearily place it back on the ground.

It’s going to be a lot more work to get that tree down and cut up. And, that’s just one of five that need work. 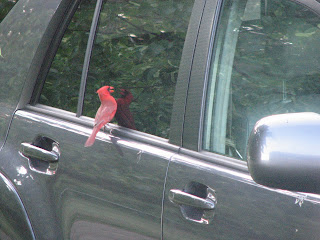 After disappearing for a couple of weeks, the Cardinal has returned. Two weeks ago he discovered the Toyota after a couple of hours and spent the day admiring himself. Interestingly, he flew from the tree to the running board, then up to the window of the back seat, then to the front seat window, then to the top of the mirror (where he would bend over -- I guess to try to see himself upside down in the mirror) then back to the tree -- staying in each location just for a few seconds. Then he would fly off to the west forest, or off to the east forest, but he would be back again in just a few minutes. He did this all the time we were there. 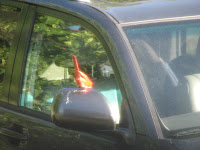 I took some pictures of him through the screen door. Carol said she had gone out onto the steps and sat there to watch him, and she thought I could photograph him from there, but that didn't work for me AT ALL. As soon as I came through the door he took off and didn't come back even though I waited without moving for a VERY long time. 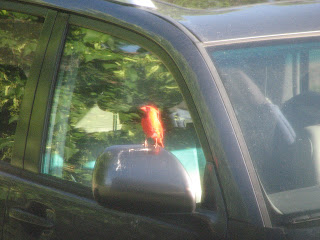 Last week when we arrived, I whistled his song (sort of) as soon as I got out of the car, and he showed up less than a minute later. His behavior remained the same -- from the tree to the running board, to the back door, to the front door, to the top of the mirror, and back to the tree. Sometimes he perched on the hood and looked in through the windshield. He seems to spend more time on the outside mirror than he did at first, and he is CLEARLY recognizing his mirror image as no threat. I think he knows it is himself. 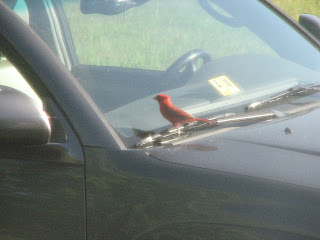 Several times I stepped to the door and whistled his song through the screen, but each time he fled. Probably can't stand to hear his song butchered the way I do it. He likes to sing while perched on top of the outside mirror -- that seems to be the only location he sings from. 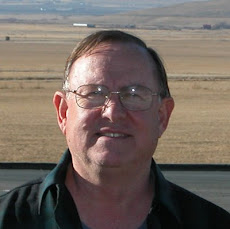